The Windows. The Well. The Wait. 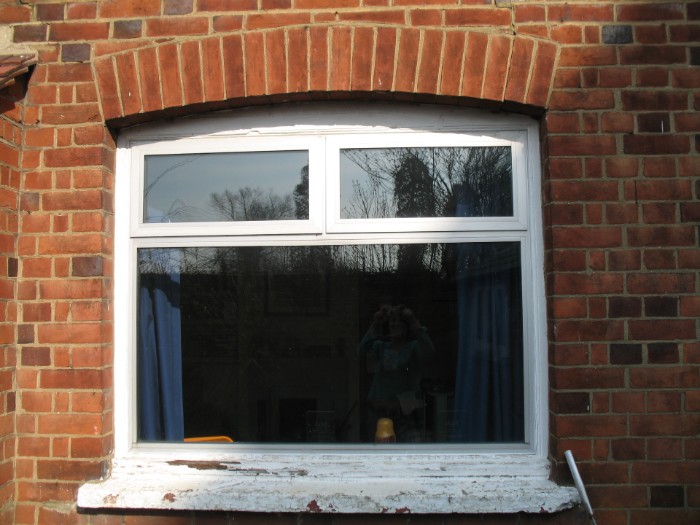 Sympathetic refurbishment. An estate agent’s cliché? Maybe. To us, restoring some period character to our home was an essential element of our architect’s brief. My business brain leads the way, backed up with enough cumulative research to support the notion that ‘Character adds Value.’ It is, however, my fascination with the human history of the house, which has delivered the clues to its architectural past. In turn, this has revealed some surprising details, which otherwise would have remained buried beneath the concrete.

Perhaps it is best for me to start with The Windows as promised. When we first viewed the house we could have considered the incongruity of the 1970’s aluminium-framed, double glazing to be an eyesore; instead we saw it as an opportunity to bring the house back to life. Replacing the windows with a characterful selection was the obvious first step to recreating a period feel. Identifying which period was not so obvious. ‘Hold on a minute!’ I hear you say, ‘Didn’t the agent’s particulars or the survey give a clear indication of the property’s age?’ Of course, yes, but it was only approximate. c1910. At this stage I should add we were aware that ours was only part of a much larger, extended house, which at some point had been split into three dwellings. Unfortunately I couldn’t even take our cue from the neighbouring buildings. All three houses are distinctly different, the windows being no exception. Armed with the sketchiest of details and with Sherlock Holmes-like determination, I headed off to our local county archives to hunt for answers. An extremely helpful archivist explained that the most effective approach was to search for the living history of the previous occupants. Combined with Ordinance Survey maps, which would narrow down the changes to the footprint, I might be able to identify in which year the alterations had been made.  After several hours of leafing through the equivalent of today’s electoral role, I was only able to conclude that the original property, ‘Highfield Cottage’, had been extended sometime between 1924 and 1937 and had not yet been subdivided at that date. I had two options: to continue with the longwinded, logical Watson investigation or take a Sherlock shortcut. Life being difficult enough as it is, I plumped for the shortcut, placing an advertisement in our parish chronicle.

Entitled: Uncovering the Past – Can you help?  I appealed for information, summarised my findings and included the following history:

“I know that it was part of the Highfield Hall estate owned by Charles Morris, which is rumoured to have housed Charles’ sister and then stable-hands for the horses on the estate. Following this it was owned by the Health Authority. I believe it was used as nurses’ accommodation for the Hill End/ Cell Barnes hospitals during the Second World War and beyond. It became privately owned in 1986, sold to one of the hospital managers who was living here at the time.”

I waited for a response, fearing that I may need to return to the archives and continue my painstaking trawl through the records; a dreary prospect.  Decisions about the windows were looming. Our architect seeming to dismiss my quest for authenticity in place of practicality, was pressing us for an answer. Then remarkably one Saturday, having just arrived at our local supermarket for the weekly shop, I received an intriguing call. Unusually for me, despite the unfamiliar number I answered. It was Mrs R. Fortuitously her sister, who still lives in the parish, had read my appeal and correctly identified our house as Mrs R’s former family home. I was delighted. Mrs R promised to visit with her sister. They would ‘bring photographs and fill in as many blanks as possible’. As a by-the-way, she corrected some of my assumptions as hearsay, clarifying, for example, that there was no such link with Cell Barnes. The brief conversation ended with her final revelation. In her early days at the house, when her daughter was a crawling baby, there had been dreadful problems with the drains. The foul stench had caused them great concern and prompted her husband to contact the landlord to resolve the problem. Mrs R was convinced it was a sewerage issue. Mr R suspected otherwise and insisted that The Well in the backyard be capped and sealed. It transpired that Mrs R had been right. That a cracked pipe had been the culprit. By then the well was just a patch of concrete. Previously oblivious to its existence, I realised this kind of discovery was not unexpected in an old property. Better that we know it now. Undoubtedly more hidden quirks will be exposed during the project; contingencies have been budgeted. After all what purpose does a contingency serve if not to allow for the unknown? Excited by the prospect of finally knowing the answer to the windows question, I shared the news with the architect. It was received with a sharp intake of breath.  ‘There’s no knowing what we will find until we dig.’ Unperturbed by his reaction, I embraced Mrs R’s information with enthusiasm. Sure the project is complex, but it’s not as if we didn’t know that beforehand. It is an old house. There will be issues for which we will find solutions. Complexity equals cash true, but with careful control of the purse strings we can make a home that both our family and future owners will enjoy living in, as much as Mr and Mrs R and those that came before.

And so to The Wait.  It is mid-August. Mrs R is due to call with a proposed visit date once she has contacted her sister. We wait. The architect is still yet to conclude the tender process with the builders. We wait. The mortgage agreed in principle months before, has stalled in the admin centre. We wait. Eager to start shopping for fixtures and fittings we wait; without solid quotes for the build we have no way of knowing how much we can allocate towards minor items such as the Kitchen. We wait. And so must you…. Until the next instalment.