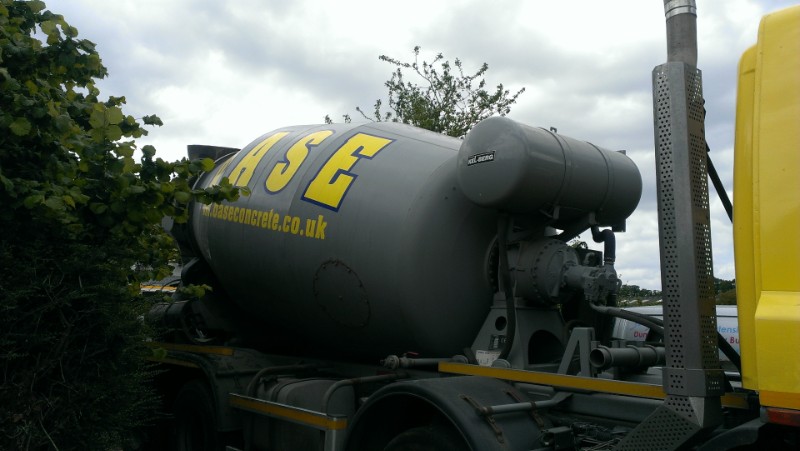 Some followers of the Phoenix Quest appear to possess expertise in the building trade and offer ‘useful’ advice: ‘Expect the worst.’ ‘The timescales will overrun.’ ‘The budget will blow.’ Since these Doubting Thomases do not have access to a crystal ball, I will forgive their cynicism and counter with confidence. Our house will be built on firm foundations; we have faith in both the builders pouring the concrete and the concrete being poured. 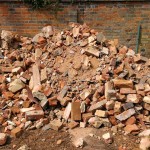 Beneath the fertile topsoil, where our plants grew with the virility of weeds and our weeds the virility of triffids, the diggers expose a rich seam of clay. Excavation for the foundation trenches is part manual, part machine as care is taken to preserve the stability of the party wall. The trench closest to the old back door is filled with concrete as exaggerated molehills of earth, rubble and clay erupt at the far end of the garden. The raised bed propped against the old brick wall, latterly a herb garden, is gone too. 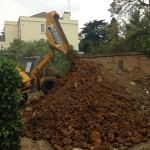 A summons to discuss brick selection takes me to the site. By happy coincidence, I arrive to find an impressive concrete lorry poised to begin filling the completed foundation trenches. How pleasing to be able to capture another milestone on camera. After this distraction, I focus on the main purpose of my visit – bricks. To this point I had paid little attention to the brick canvass presenting itself to our neighbours at the side of the house. Other than the dovetailing of the 1930’s extension with the older Edwardian building, few details had caught my eye. Un-trained I picked up ‘old’, ‘weathered’ and ‘red’. Closer inspection paints a picture of contrast and variety; the bricks, like brushstrokes, blend together as a whole, yet individually they are distinct in both size and hue. The question of matching throws up a conundrum; matching to the Burnt Umber of the back or the Winsor orange of the front. The orangey-red wins. The majority of the untouched parts of the building are this colour; very few of the darker reds will remain or be easily seen and the supply of the best matched option is plentiful. 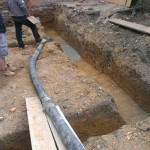 Within days the mercurial sub-structure has mushroomed to form a definite footprint. Large spaces laid out before us provoke a sense of reality. The drainage systems are nearly there. The footings are ready. We are poised on the cusp between sub and super-structure. Many lay-voices instruct us to expect swift above-ground advancement. Just as football fans believe they could manage their Premier team with more skill than the guy who is paid to deliver results, we hear ‘Oh you’ll be up to the roof in no time.’ 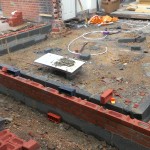 Preparation is underway for the hall to be extended forwards, with more concrete poured in a trench to the front of the main entrance. Still more of the clay seam is evident through the excavation of the final piece of the drainage system; the soakaway pit for storm water run-off produces enough of the stuff to make a kiln-full of pots. It’s a fair size; large enough to hold a member of the crew. I’m hopeful they gave him a ladder to climb out before it was backfilled with hard-core. 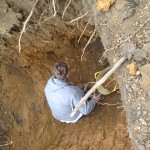 We sanction our first additional spend to level the old shed base at the back of the plot; a sensible move, since access to this corner will prove tricky and more costly post build. For the first time the outside space is distinct from the inside and the beginnings of a courtyard are clear to see. The last trench along the back wall is filled with concrete, so from now onwards the project is literally upwards. With that clever setting on the camera we capture a panoramic view of the open side of the house, soon to disappear behind new structures. 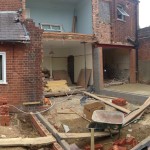 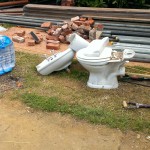 Much can change in five days. Walking down the path several obvious differences hint at activity within the walls. I pass our upturned bath and disconnected toilet on the left, then break out into a huge smile at the sight of the newly constructed hall. 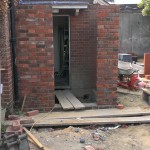 Built from our reclaimed bricks, the wall looks as though it has always been there. Whilst the entrance-way is missing a floor and a roof and the old wall is yet to come down I step excitedly into the newly formed space. ‘Walking the plank’ across the void, I reach the bottom of the stairs. Looking up, I spy the old hot water cylinder, lurking on the landing. Ooh I wonder what else we will find upstairs?!

Edging down the darkened corridor I am greeted by an unfamiliar scene. I had expected an empty bathroom, given I had passed its contents lounging around in the garden. I had not expected the internal walls to have disappeared too! The space previously occupied by the corridor, bedroom, bathroom, landing cupboards, water tank, boiler and separate toilet is now one big room.

Evidence of the past can be seen in old wall paper on the ‘corridor’ wall and the lath and plaster ceiling. Both are in the oldest part of the house and may give further clues to its history. The ceiling is harder to date as this construction method was used for several hundred years until the 1940’s and 1950’s. There is little or no horsehair in the plaster though so we conclude it is consistent with the Edwardian period or later. The wallpaper research is a job in itself. Manufacturers’ archives are available; vintage enthusiasts offer suggestions of where to begin; the V&A may be the place to start. I will report back when I know more. 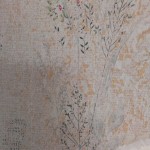 Back to the present. It is time to meet on site with our chosen windows supplier for an initial survey. In earlier posts I have discussed our challenges with window selection at length and do not intend to labour the point here. In summary we have decided on timber casements and French doors, with the intention of bringing a consistent, traditional look across the property. I begin this meeting as a window-novice; Discussions of swept heads, Georgian panes, interior and exterior trims, French windows, floating mullions, and millimetre allowances for floor levels ensue. By the end I am a little better informed. I realise the builder’s quoted lead-time of two and a half years for a swept-head lintel is likely to be a leg-pull and undaunted decide to stick with this detail above the master bedroom window. The windows are high quality, hardwood, factory finished, painted white. We are future-proofing our selection. Not that we are intending to sell anytime soon but it’s always sensible to have an eye on saleability, particularly when it comes to such a significant investment. Timber doesn’t come cheap. True, we could have saved a large chunk of our budget if we had opted for UPVC or even Aluminium. In the end though it came down to quality and added value. I’m confident our decision will pay off. 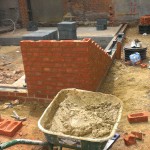 With the walls ever-inching upwards behind me, I am tasked with producing a plan for the external hard-landscaping, along with obtaining quotes for the stump grinding of two overgrown laurels, removed earlier in the year. Immersed in my role as project manager, I thrive on the activities which fall into my lap more frequently as each day passes. Frustrating though it is, writing must take a back seat for a while……