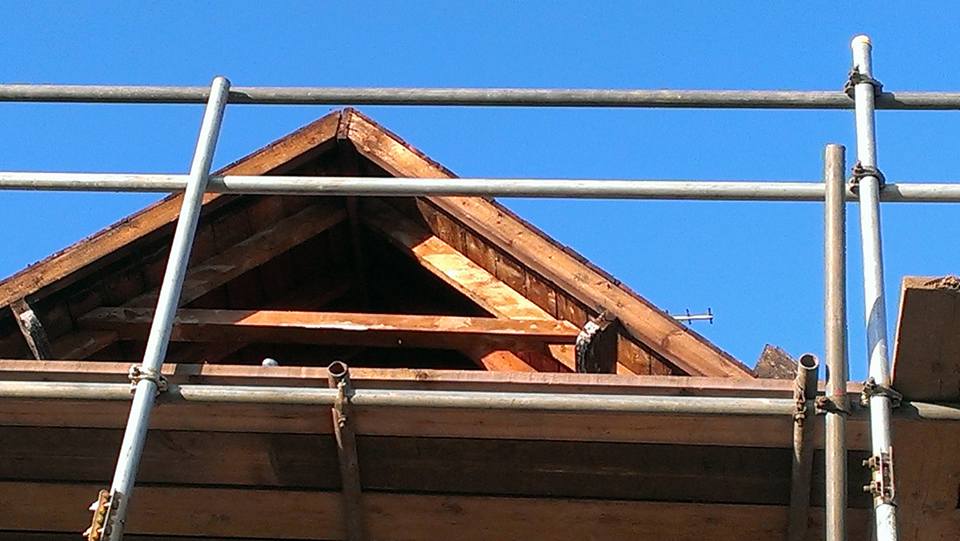 Today is one of those days of Blue Sky reality. The Blue Sky dreaming used to stretch my vision to a vanishing point; always drawing me towards the goal; always just out of reach of my fingertips. No more. After many years of imagining and several more of planning, with a half-year hiatus tagged on at the end for good measure, build day has finally arrived.

For anyone already following the Phoenix Quest blog, thank you for your patience. From now onwards I intend to document the highs and lows, the dilemmas and decisions as the build moves forward. Some of you will have had sneak previews of our progress through Facebook and twitter. I will be updating these too with snapshots of the house as it rises from the ground.

First a minor recap. Bouncing back from the disappointment of our postponed start, I filled the six months from November to April with essential activity of the non-construction variety. The party wall award needed chasing to ensure its continued validity, as did the building regulations notification; the amended plans needed resubmitting as a ‘non-material amendment’ and the builders’ quotation and contract needed finalising, then signing. It felt as if the paperwork and permissions had reared up again and might never be tamed. Thankfully everything fell into place and we were delighted to appoint Dumpletons as our builders to start after the May Bank holiday.

April was a frantic month of searching for and securing our temporary residence; packing up a mountain of belongings, including the contents of a Tardis under-stairs cupboard which refused to ever be empty ; notifying utilities companies, our council tax authority and the post-office of the change of address; making arrangements for new insurances for both houses. Initially I made a list, then a project chart to capture all the activities and prioritise my time. Fairly soon it got to fever pitch and everything became urgent, so I stopped referring to the plan, instead working flat out to hit the deadline of move day. I’m certain the preparation did pay off as move day came and went almost without a glitch. I say almost. No Wi-Fi connection at the new house! I thought my conversation with our provider had covered this off, as they assured me the service could be switched from one address to the other without the need for an engineer. Indeed the service was available several hours earlier than the promised ‘midnight’, but we had no way of connecting to it without the correct socket for the wireless hub. A couple of calls to customer services and all was resolved with an engineer booked later the same day. Exhausted, after a full four day bank-holiday weekend of moving, three trips to the dump, two to charity shops, we are ready…. one drum roll please…..

Due to the aforementioned Tardis-cupboard contents and the ‘few’ bits and pieces left in the shed, I have genuine reason to return to the house on day one of the build to collect the more items. Natural curiosity draws me there too. It’s midday. I pull into the driveway behind several vans. I begin my Photo-story with this view, commencing the visual record of the build, to chart its progress and enable the obligatory before, during and after shots, necessary for any self-respecting renovation. 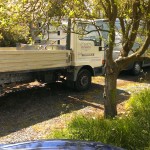 Peering round the corner through the gate way I am amazed to find careful, sympathetic demolition already taking place. In a pre-build meeting the previous week, the builders promised to be true guardians of our home, respecting its history and character. Whilst it is not a listed building, they planned to nurture it, treating it as a restoration rather than a bolted-on, new build. They are true to their word. There are no machines in sight. Instead the outbuilding is being dismantled by hand, almost brick by brick. Meticulous attention is paid to preserving as many whole bricks as possible, for reuse later in the build. I have no doubt our home is in safe hands. After a quick scoot round inside to remove the last remaining possessions I leave them to their work. 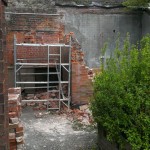 A few short days later and the outbuilding, a.k.a the shed, is completely down. Preparation is underway to break through and demolish the existing flat roof extension. With its solid pillars and valuable lead roof, we estimate this part of the building to be a ‘between the wars’ addition, sometime from 1924 to 1937. Clues from the ordinance survey maps pointed to this era; the dovetailing of the bricks of a different size and colour provide supporting evidence. This is not new news, as I had uncovered these facts in my earlier research. The new discovery comes in the form of cavity walls! I am as surprised as anyone to find these revealed to us, as the windows are removed and the structure is exposed. All that time in a drafty old house and we could have wrapped the building in foam insulated walls instead of wrapping ourselves in blankets!

Having researched further on ThinkInsulation  I can see how we, the architect and the builders were all fooled. Apparently 1932 is the crucial year, when solid brick construction was superseded, and cavity walls were introduced. This narrows the likely construction date of the addition to between 1932 and 1937. To be fair to all concerned we were not armed with a confirmed date, only the Flemish Bond brick pattern. According to ThinkInsulation this design could lead to the legitimate conclusion that the wall was likely to be a solid brick configuration. With hindsight, it is easy to deduce that the Flemish Bond pattern was chosen to blend in with the older part of the house and it was this on which we all based our presumption.

With the lead roof removed and safely locked up in the study (for sale to a scrap merchant at a later date), I complete the ultimate sweep of the rooms to make sure nothing else is left behind. I must confess, the previous evening it occurred to me I had left the ‘fridge-door’ children’s art, still blue tacked to the infamous cupboard door. In fact its retrieval was my primary reason for the visit that day. Realising how it is all too easy to overlook the obvious, I am pleased to say my belated vigilance paid off. A short while later I walk to my car carrying a random collection: the artwork, a dinner-suit, a t-shirt, a Lego pilot and the name plates from the children’s bedrooms!

We venture out on the first of what is to become our regular week-end nose abouts. Such a change in such little time. Our new floor-plan aims to create a light and open feeling, with an improved flow throughout the ground floor. 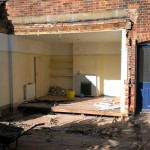 As we round the side of the building we are undeniably assaulted by a vision of ‘open-plan’ living, to the extreme! The lounge is open to the elements, sun pouring through the spaces where  the roof and windows used to be. Foothills of rubble have taken the place of the shed, with cairn cousins sprouting up around the garden. The magnitude of the task ahead is laid clear for all to see. Standing inside, looking out at the summer sky, I conclude that week one has ended, without question, in Blue Sky reality. 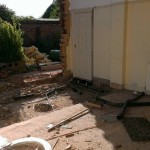